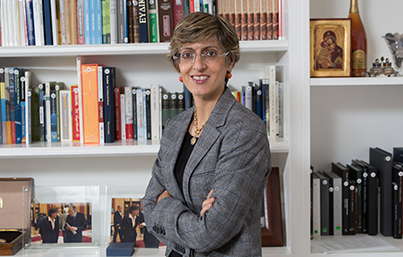 In June 1989 she graduated with honors in Law defending a dissertation in bankruptcy law.

She became a lawyer in July 1992, obtaining the “Toga d’Oro” award.

As well as being the holder of her own Law Firm, with offices in Rome and Milan, she is qualified to act as defence counsel in the highest courts since many years.

She mainly provides consultancy and legal assistance in favour of international companies and groups in criminal law and tax matters. In addition to dealing with compliance, providing risk assessment activities and drafting and updating Organizational and Management Models required by Legislative Decree no. 231/2001, she provides companies with out-of-court consulting services (so called preventive criminal law) in the context of M&A and restructuring operations, assisting the Client in defining investment strategies in the Italian territory.

She was a member and chairman of the Supervisory Bodies of leading companies (including in the energy and telecommunications sector). She also was a member of the Board of Directors of listed companies.

She carried out consultancy and assistance on data protection law, anti-money laundering and criminal offences under articles 55 et seq. Legislative Decree no. 231/2007.

She also acted as defence counsel in a large number of cases of crimes against the public administration, heritage, public trust, public safety and commerce, for crimes committed in the press, and for unlawful acts in the medical/surgery profession as well as in workplace health and safety matters.

She was elected to the Senate of the Republic in 2018 (XVIII Legislature).

From June 1, 2018 to September 5, 2019 she was Minister for Public Administration, delegated to digitalization and simplification.