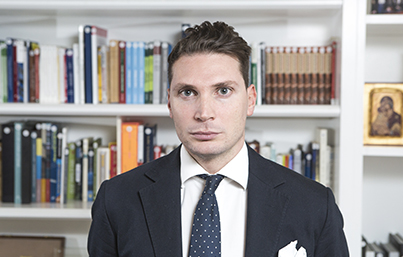 In 2007 he graduated with honors in Law from the LUISS Guido Carli in Rome.

In 2009 he graduated from the same Institute with a level II master’s degree in corporate criminal law.

In 2012 he provided professional advisory services for research into judicial matters, as part of the work of the Judicial Commission of the Chamber of Deputies.

He has been a lawyer since October 2011.

He mainly provides legal advice in the field of economic criminal law and in administrative corporate liability pursuant to Legislative Decree no. 231/2001.

He provided legal consultancy in the interest of public economic Institutions and multinational corporations, drafting Due Diligence reports in favor of companies, including foreign ones, especially in the energy sector.

He has developed specific skills in the field of white collar crimes, dealing, in particular, both in out-of-court and judicial matters, with environmental, tax, bankruptcy and corporate crimes (market abuse, insider trading).

He provides judicial assistance in the criminal sector.