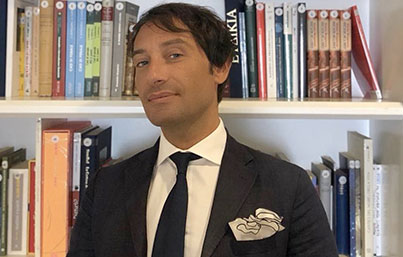 In 2005 he graduated with honors in Law at the Federico II University of Naples, discussing a thesis in Criminal Procedure entitled: “The criminal irrelevance of the fact: “de minimis non curat praetor”?”.

In 2012 he obtained, with praise and dignity of publication, the title of PhD in Law and Economics at the Italian Institute of Human Sciences of Federico II University of Naples, with a thesis entitled “Criminal Justice and Economic analysis”.

From 2006 to 2011 he collaborated with the chairs of Youth Legislation, Criminal Law and Procedure of the Federico II University of Naples, where he was appointed lecturer of these subjects.

In the same period, he also collaborated with the Chair of Criminal Procedure of the University Suor Orsola Benincasa of Naples.

He is the author of scientific essays and publications; he has participated in numerous conferences and lectured on the issues of criminal law and procedure.

He has been enrolled to the Bar since 2010 and he is qualified to practice before the Supreme Court of Cassation and the High Courts.

He worked as a legal consultant in favor of national and foreign companies, dealing with due diligence and compliance, also drafting Organizational, Management and Control Models.

He is a member of Supervisory Bodies of leading national companies.

In criminal matters, he gained specific experience in the field of white collars crimes, focusing in particular on energy law, corporate and tax law, as well as anti-money laundering.

He provided legal advice and assistance to Italian and foreign individuals in the field of extradition procedures.

He provides judicial assistance mainly in the criminal and tax criminal sector.